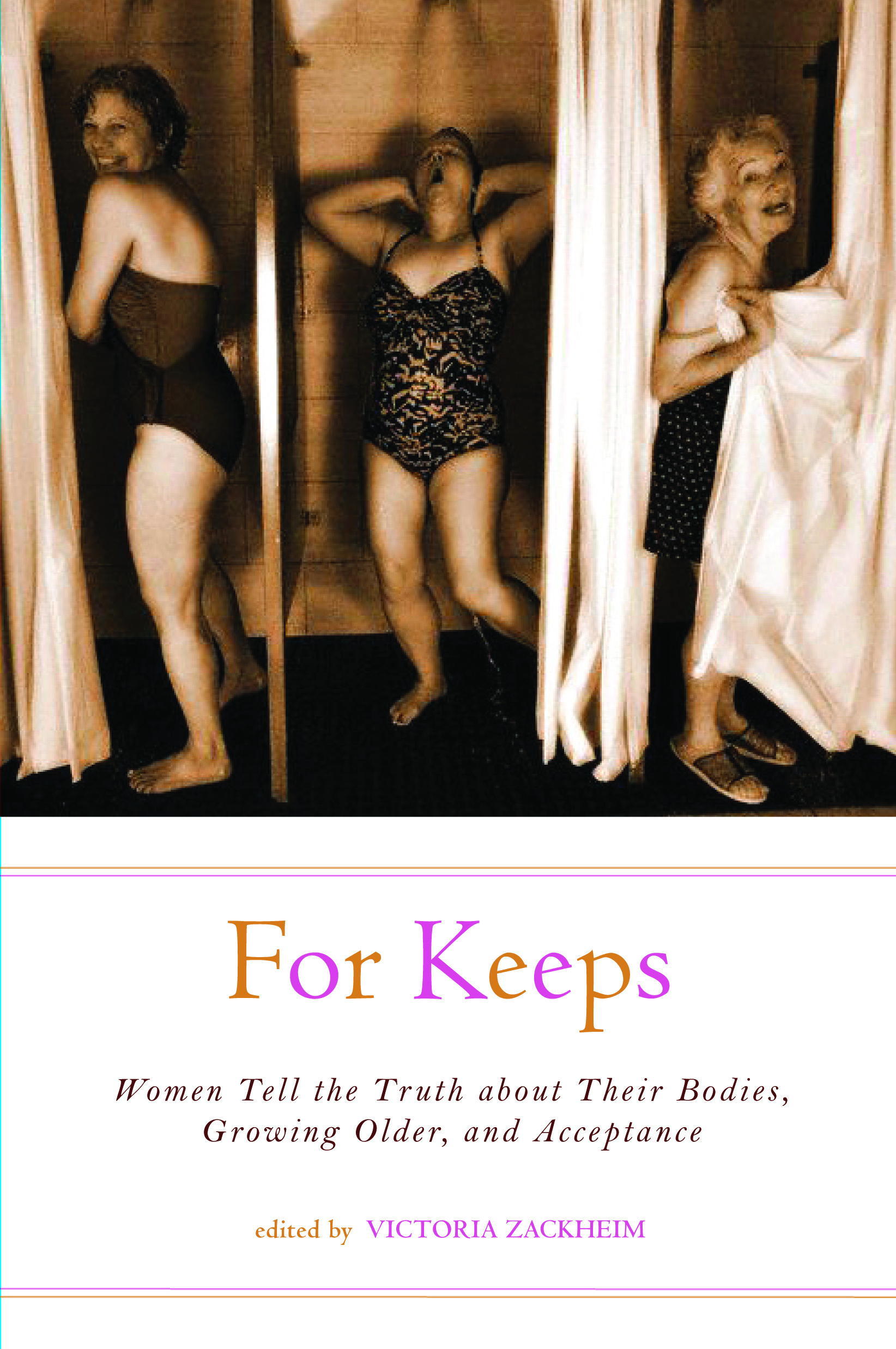 For Keeps: Women Tell the Truth About Their Bodies, Growing Older, and Acceptance

LEARNING TO LOVE THE BODY
Women writers on celebrating the imperfections

Some anthologies suffer from too much of the same thing. But in For Keeps: Women Tell the Truth About Their Bodies, Growing Older, and Acceptance (Seal Press), editor Victoria Zackheim has brought together writers from a range of ages and cultural experiences on the subject of living in a female body. Novelist Elizabeth Rosner becomes an artist’s model in an attempt to make peace with her body, to try and see it simply as “contours and dimensions, a graceful and anonymous arc in space.” Writer Carrie Kabak decides that cutting off ties with her criticizing mother—who is familiar with “every eyelash, every mold and freckle”—is the only way to make her body her own. Other essays deals with injury, illness, and other major failings of the physical being. Some women become athletes, pushing their bodies beyond what they thought capable, while some watch their bodies crumble and degenerate from a lifetime of pushing. This surprising collection is full of moving takes on aging gracefully in a female body.

PUBLISHERS WEEKLY
Nora Ephron’s bestselling I Feel Bad About My Neck has perhaps opened the door to discussing the failings of the female body and of female aging, and the 27 contributors to this collection deserve gratitude for enlarging the discussion. The essays detail a plethora of possible events associated with aging: aging mothers and mothers-in-law, one’s own increasing frailty and final illnesses. There are deaths and divorces after long-lived marriages. Other contributors write of the abrupt arrival in the world of acute or chronic illness. Two very different threads run throughout the essays. One is the degree to which each writer has found a way to retain or regain a sense of power over her life. The other is the power of childhood messages and experiences to resonate for decades....

SAN FRANCISCO CHRONICLE
The human body is a tough machine. Women's bodies in Victoria Zackheim's straight-up, affable anthology, "For Keeps," are put to the test, experiencing bulimia, breast cancer, a ruptured disc in the cervical spine, suicide attempts, a weird rash, digestive problems, multiple sclerosis and less familiar conditions, such as Sjogren's syndrome (like lupus) and avascular necrosis (a bone disease). In a post-"Vagina Monologues" age, nobody will blink at Abby Frucht's reflection that "except that it costs me my whole deductible, I enjoy my hysterectomy." Menopause and flesh-sucking undergarments are today more the stuff of yawps than of whispered confessions....Zackheim describes her anthology as "an assemblage of emotions, confidences, and experiences," the naked recounting of personal stories. Each essay is told in the intimate first person (the exception being a narrator who claims the strong upright pronoun only after dumping a no-good boyfriend), and there is value in these honest accounts that could be critically relevant to readers....
A sort of illumination occurs for the writers as they grow older. Without acceptance, and the humor it makes space for, this anthology would be too grim, chronicling as it does one body's trial after another. Even with the humor, some will cringe in discomfort at the honesty and self-appraisal.
Kate Foster is a writer in New York City.

STORY CIRCLE BOOK REVIEW
Susan Wittig
For Keeps is not an easy book to read. It is not about pretty women with perfect bodies who find easy acceptance in a beauty-obsessed culture. No. It is an impolite, impertinent, irreverent collection of essays written by twenty-seven much-published and gifted writers who are not afraid to tell the truth about the imperfect bodies they have learned to live in—and learned to love. These are hard truths. "My Mother's Body Image, My Self" (Sara Nelson), tells us that our obsessions about the size and shape and appearance of our bodies are often taught to us by our mothers—who may have been obsessed with their own bodies. An unhealthy preoccupation with physical image and the desire to use bodies to please men can be passed from mother to daughter.... "What I Gave Up" (Ellen Sussman) follows the life of a woman who (pushed by her father) went from being a "killer tennis player" to being a compulsive competitive runner to the practice of yoga—each transition accompanied by the rupture of a spinal disk. Now facing her third spinal fusion, Sussman can say, "What I hope for is this: that I can live in this body without pain; that I can use it as well as I'm able to; and that my mind can accept these changes. I wish that every woman could read and take to heart each of the stories in this anthology. It is a rare collection, uncompromisingly honest, ruthlessly real, uncomfortably raw, yet warmed with a very human compassion and brightened by the triumphs, small and large, that make each of these writers a heroine in her own right.

FAITH: Essays from Believers, Agnostics, and Atheists
What do you believe? Is there a God? What does "faith" mean to you? Is it a guiding force...or a concept you reject? In this book, twenty-four leading authors---from New York Times and international bestsellers to CNN journalists; from political activists to rabbis; from the irreverent to the devout---explore their thoughts and feelings about faith, and discover answers to questions many had long ignored.

He Said What? Women Write About Moments When Everything Changed
One little word, one casual lie, one devastating announcement and our lives are turned upside down forever. In He Said What? Women Write About Moments When Everything Changed, 25 gifted women writers share profoundly personal moments in which a man in their life said something good or bad that changed them irrevocably.
EXIT LAUGHING: How Humor Takes the Sting Out of Death (May 2012)
Some of our country's finest authors share the personal experiences of death...and humor. Their pieces are poignant, funny, intimate, and sometimes downright laugh-out-loud hysterical. Malachy McCourt, Jacquelyn Mitchard, Ellen Sussman, Barbara Graham, Zoe Carter, Sherry Glaser-Love...and more.
For Keeps: Women Tell the Truth About Their Bodies, Growing Older, and Acceptance
Do we devote our energies to beauty and fitness? Do we fight our body ... or befriend it? Twenty-seven gifted authors share their secrets.

The Face in the Mirror: Writers Reflect on Their Dreams of Youth and the Reality of Age
When you were a child, how did you imagine yourself as an adult? And now that you're an adult, have you become that person? Leading authors answer these questions.

The Other Woman: Twenty-one Wives, Lovers, and Others Talk Openly About Sex, Deception, Love, and Betrayal
A cheating husband? An unfaithful wife? A child affected by infidelity? Many viewpoints, from emotional to funny, raging to accepting. All of them memorable! Three weeks on Canada's bestseller list!

The Bone Weaver
“The sense of place... past and present, is captivating and profound.”
–Book Passage (News and Reviews)
Loading…}